Planet of the Humans

The takeover of the environmental movement by capitalism is now complete.

This 2019 documentary by Jeff Gibbs demonstrates how “energy transition” is but a delusion.

It also faces us with the “environmental” activist’s narrative that ‘the’ problem is over-population: no, the problem is capitalism, consumerism, Growth, and our inability to live without consuming more energy. The problem is caused by the hubris of occidental way of life ; the American Dream is but a nightmare for the whole species.

It shows how “environmental organizations” are actually “environ-mental”: surrounding our minds, they lie to the public, take money from fossil fuel companies, and invent a sustainable future-of-energy that was never there. Here, for example, these very well-known organizations promote the use of “biomass” – which means burning thousands of tons of trees per year, sometimes mixed with oil-based residues like retired tires to boost the furnace temperature, using oil-based motor engines to cut and process trees, spending more natural gas than generating electricity… WTF? 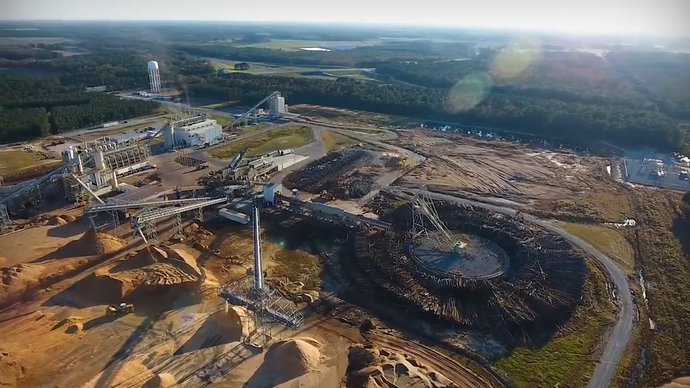 The only reason we’re not talking about over-population, consumption, and the suicide of economic growth, is that would be bad for business. Especially the cancerous form of capitalism that rules the world, now hiding under a color of green.

How is it possible that this system continues after the COVID-19 crisis? It’s only possible as we, citizens, accept the industrial and State propaganda that we’re going to transition to so-called clean energies: it won’t happen any time soon. Our only route is to transition away from capitalism and leave consumerism and industrialism behind us.

There is a way out of all this. We humans must accept that infinite growth on a finite planet is suicide. […] We must take control of our environmental movement, and our future, from billionaires and their permanent war on planet Earth. They are not our friends. Less must be the new more.

The conclusion of the documentary, is that we are responsible for what happens. I found it quite a weird ending as the whole narrative was about a systemic problem of capitalism taking over the opposing environmental side to a point where major profit was realized by boosting the speed of destruction of life on Earth. Anyway, the final image of the documentary is a quote from 1962 by late environmentalist and marine biologist Rachel Carson:

Humankind is challenged, as it has never been challenged before, to prove its maturity and its mastery – not of nature, but of itself. 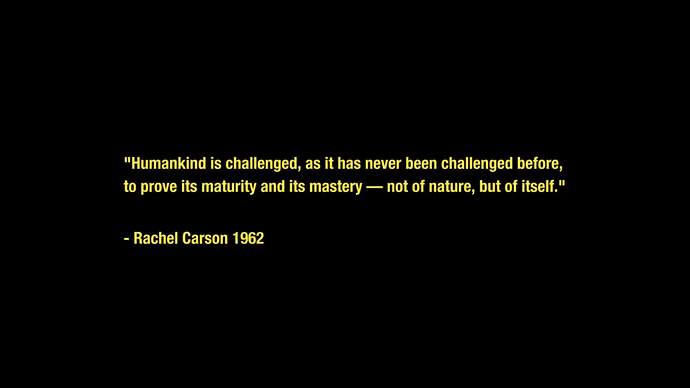 George Monbiot made an intervention on Twitter about this documentary’s claims about over-population – which confirms my bias, so here it is:

Prompted by the shocking falsehoods in Planet of the Humans, this thread asks why so many people in rich nations claim that the biggest environmental problem is #PopulationGrowth. The conclusion will enrage some people, but I think it’s unavoidable. Let’s take this step by step
There’s no question that population growth exerts environmental pressure. It’s one of many issues about which we should be concerned. But the global impact is much smaller than a lot of people imagine.
First, the headline figures. Global population growth today is 1.05%. That’s half the peak growth rate, reached in 1963 (2.2%). In other words, population growth is not, as many claim, exponential. The rate is falling rapidly. 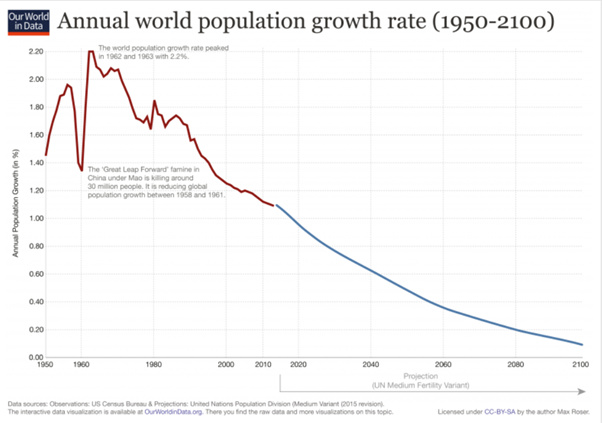 By contrast, until the pandemic, global economic growth had been hovering around 3% for several years, and was expected to stay there. In other words, it was exponential. After the lockdowns, governments will do everything they can to get it back on track.
Does this mean population growth has 1/3rd the impact of economic growth? Not at all. It’s overwhelmingly concentrated among the world’s poorest, whose lack of purchasing power ensures they each tread much more lightly on the Earth than the rich.

How does the number of children vary across the world and over time? What is driving the rapid global change?

Many of you know the formula for predicting environmental impact: Impact = Population x Affluence x Technology. Among the poorest, there’s little A or T to multiply the P. The impact of population growth on climate, resource use etc is MUCH less than 1/3rd of rising consumption.
As Our World in Data notes, “Even several billion additional people in low-income countries … would leave global emissions almost unchanged. 3 or 4 billion low income individuals would only account for a few percent of global CO2.”

There are two parameters that determine our collective carbon dioxide (CO2) emissions: the number of people, and quantity emitted per person. We either talk about total annual or per capita emissions. They tell very different stories and...

Undoubtedly, rising human numbers can have important local effects: pressure on housing, green space, wildlife, water quality etc. And it’s essential that all women have full reproductive choice, full control over their own bodies and full access to family planning.
But I see population growth repeatedly blamed as THE MAIN CAUSE of climate breakdown and other global issues. This is flat wrong.
There’s something else to note. The great majority of the world’s population growth is happening in countries where most people are black or brown.

This article includes a table of countries and self-governing dependent territories by annual population growth rate. The table below shows annual population growth rate history and projections for various areas, countries, regions and sub-regions from various sources for various time periods. The right-most column shows a projection for the time period shown using the medium fertility variant. Preceding columns show actual history. The number shown is the average annual growth rate for the per...

So why do so many people in the rich world (the great majority of whom, in my experience, are male, white and quite affluent) insist, often furiously, that the “real” global issue, the “elephant in the room”, is population growth?
The first part of the answer is deflection. Blaming other people for your own impacts is a familiar means of avoiding responsibility and shedding feelings of guilt. But why point to the birth rates of the poorest people? Why not to consumption by billionaires?
It’s clear to me that generalised deflection is an insufficient answer. This is a particular variety of deflection. What we see is white people pointing the finger at black and brown people, saying “It’s not us. It’s Them”.
In different ways, this has been happening for a long time. Throughout the colonial era and after, the rich nations portrayed themselves as the “civilised”, virtuous actors, while their colonial subjects were “inferior”, “barbaric” and “degenerate”.
There was – and is – a long-standing moral panic about the reproduction rates of these “inferior”, “barbaric” and “degenerate” people. If something was not done, “They” would overwhelm “Us”. The human species would decline as “inferior” people took over.
It was this terror of being “outbred”, “outnumbered”, “diluted” that inspired the eugenics movement. A similar set of claims persists to this day, and is popular among white supremacists. It’s called the Replacement Theory.
We all absorb belief systems of which we are only vaguely aware (or sometimes entirely unaware). We reproduce ideas unwittingly, often in new contexts. Unless we think for ourselves, we obliviously mouth other people’s words.
So what is the disturbing conclusion to this thread? The answer to my question - “why do so many people in rich nations claim that the biggest environmental problem is population growth?” - is … #Racism.
I’m not saying this to cause offence. I’m saying it because it appears to be the most likely and parsimonious explanation of a bizarre phenomenon: affluent people with enormous impacts pointing the finger at poor people with tiny impacts.
Nor am I claiming that most of those who over-emphasise population are intentional racists. I think it is possible to entertain subconscious racist beliefs without actively wishing to discriminate against people of colour.
But I also believe we should call it out for what it is. More thoughts on this issue here:

How did Michael Moore become a hero to climate deniers and the far right? |...

Lest to say I’m not entirely convinced by either perspectives: I think there’s good in both, and Jeff Gibbs’ film makes a point, and gets the conversation started. It’s important to realize, especially in a time where post-confinement means negotiation to arbitrate new massive funding to the “ecologic transition”, that many of the same major actors of the “old economy” that put us into this situation in the first place, are also the major actors of the so-called “ecologic transition”. We must remain vigilant not to delegate our own struggle to our very enemies. See #cooperation:de-la-dette-et-des-dividendes for reflections on the re-appropriation of the banking system, questioning illegitimate debt and exploring more “ecological” outcomes to this fascist-sanitary crisis.