This article was first published on the first of January 2013.

15 years ago, Eric S. Raymond published Good bye "free software"; hello "open source", that changed the face of the Free Software community. In that article, the author defined “the next phase”: to have free software accepted in the corporate world. 15 years later, it’s time to reposition.

In 1998, free software[fn:1] still was marginal. Although widely accepted in technical and academic circles, it could not break MicrOracSAPple’s oligarchy over the corporate world.

Raymond’s article was not a technical article. It was all about marketing[fn:2]. It was about hiding the reason why we’re making our software free, and focus on its /excellence/; it was about turning free software into a commodity, so that corporate people would be at ease with the concept.

In retrospect, that initiative brought positive results with regard to its objective to bring free software to the mainstream. Indeed, the Open Source Initiative did a lot to promote open-source software to the corporate world, and probably played a key role in the acceptance of the technology. And as far as the reasons invoked by ESR in his article are concerned, it completed its task beyond expectations. But there’s no reason to believe that same results would not have been achieved without a label change.

From Netscape to Google

In 1998, Netscape became the big corporate player of the free software world. With the release of Firefox’s source code, that prompted ESR and others to ditch “free software”–the label.

Then came a whole lot of booming companies using free software and, sometimes, promoting it–such as Google; and prominent software companies started “open sourcing” their products; the best part of the mobile smartphone market runs on free software; and the NSA itself, the world’s top employer of mathematicians, released free source code to enhance the security of the Linux kernel. All events of the magnitude of the initial public release of Firefox.

Today, most Internet companies abundantly use free software in their core business, some give important contributions back to the community, either by code or sponsorship of free software projects; beyond academia, use of free software became law in governments, such as Iceland, Brazil, Ecuador[fn:3], Germany, Venezuela, or more recently Uruguay…

Today, the “fear of free software” is gone, and around the world, individuals, businesses and governments embrace software freedom, for its excellence, and for other reasons that we’re going to address.

Why Is Freedom Important?

Everyone has at least a good reason to prefer software freedom over non-free software products.

Individuals may want to keep their computing activity in line with their ethics, customize software to meet their specific needs; share it with their friends, or keep their purchased books off the censorship hook of some over-sized misanthropic company.

Businesses may want to cut on the costs of setup and maintenance, benefit from the large and efficient community that will fix bugs as soon as possible, and keep open the possibility of tailoring the functionality, or producing software themselves, at a fraction of the cost of proprietary equivalents.

Governments may want to keep a foreign company from operating potentially malicious software within their own infrastructure, and control their own software production, and guarantee the sovereignty of their State.

Each of these points could have been deemed unnecessary, or even paranoid, 15 years ago. But since, we’ve had Wikileaks, Anonymous, forged SSL certificates, Stuxnet, Red October, an illegal war in Iraq, Homeland Security, RFID chips, bugged and remotely controlled smartphones, etc. Corporate intelligence and digital warfare are not science-fiction anymore: they are facts, and prime time news. And “nervous corporate types” do know that paying a license fee will not protect their datacenter against a determined attacker, maybe even the opposite, given the track record of proprietary software insecurity.

But, it can’t be for convenience, or cutting costs, or security that we’re insisting on software freedom. So, why is freedom so important?

The Ambiguity of “free”

In the ambiguity of the English term “free”, ESR and the open-source proponents’ find their main argument to avoid it: it could mean gratis or it could mean empty; why the hell would it mean /libre/[fn:4]?

It transpires from ESR’s text that the double-meaning of free-gratis, and free-not-owned would eclipse the usual meaning of freedom. Indeed, the declared objective is to reassure the markets, and give a serious–as in non-activist–tone to free software.

It is unfortunate that ESR himself did not (want to) realize the mistake he made when stating that free software remained “stuck in a marginal, adversarial position”, antagonist to commerce. It was not then, and is not now: free software is free! You are free to do business with it, including selling copies of the software[fn:5], although the main business model associated to free software is one of service.

Now “free” built another reputation during this period. After a decade or more of “free” online services, “free” not only sounds like “gratis”, but also like a trap: if a product is “free”, then the product being sold is you.

It’s time to assert the meaning of free we’re seeking, rather than to hide it. There’s no ground in letting hostile parties take over the meaning of our own words. Free, used well, is not replaceable; and nobody will argue with the meaning of /free/ in the First and Fourth amendments to the U.S. Constitution; Liberté, Egalité, Fraternité does not leave any ambiguity as to the meaning of Liberté: it’s freedom. Period.[fn:6]

It’s About an Ontology of Freedom

So, if freedom became such an empty shell, why keep using it? It’s not about labels, it has never been about labels[fn:7]. But the struggle, today and before, concerns freedom[fn:8], the concept. It’s difficult to define by words[fn:9], but can easily be understood by illustration. It’s not a matter of marketing, but a matter of ethics; not a matter of semiotics, but a work of ontology.

The freedom I believe in is one cooperatively evolving from the co-learning of all humans, across Centuries and cultures, in addressing ignorance, domination, corruption, malevolence; Prometheus brought us freedom, by dissipating the dark veil of ignorance, and appeasing the fear born from it. My freedom is one of science, one of sharing, one of history. My freedom is never attained, and always endangered by conservative forces. My freedom knows no boundaries but one: your lack of freedom.

So it’s time to reposition. We need to get back to the roots.

Open-source vs. Free Software has a bitter taste of Us vs. Them. Truth is: we’re one big family, on one little planet, and competition won’t lead us anywhere else–at least not any time soon, and we have more urgent problems to tackle than to ponder the next Faster-Than-Light travel engine.

The layman starts understanding the importance of transparency in public processes: the United Nations made it a point to recognize Internet access as a Human Right, but free software does not enjoy such recognition yet; Wikileaks keeps demonstrating the proprietary secrets of publicly-funded governments’ covert ops[fn:10]; and as more unethical practices unfold in the media, the awareness of the general public raises sharply about the ethics of foreign policies and globalized businesses.

More than ever, we need freedom. If we ever want to live in a world beyond short-term-profit, we need to expose and address global issues globally. In order to achieve such a Global Brain magnitude of human interaction, we need to embrace computing as a mind amplifier, alike the Computer Science and Internet pioneers.

In the next few years, as the old world is still rushing at full speed toward a solid wall, geo-strategic tensions will increase. How to ensure that these tensions are mostly resolved diplomatically, rather than warily? There’s no definite answer to that, but some hints inherited from History:

Free Software as a Specific Technology

An obvious answer to that question is: “free software gives you freedom!”[fn:11]

According to Gilbert Simondon’s Theory of Individuation[fn:12], the means of production of an arbitrary technique are deeply rooted into the resulting technology ; any open-ended technology can evolve in unexpected, and unintended ways ; quality comes by successive iterations ; a complex network of simple elements is more fit than any static construction (made for a particular purpose) ; etc.

That makes copylefted free software particularly well-suited for developing a public infrastructure: its development is driven by the needs of the user, and its strong Copyright policy makes it available to the public, once and for all. Its development model also fosters creativity, by allowing anyone with an idea to implement it and propose it to the public: marketing is much less important here than excellence of the product; like Science, free software relies on peer-review to test its quality and pertinence, and does not impose blind trust on its users, like non-free software does.

One of the less technical aspects of software freedom, its reliance on community, also provides a foundation for cooperation in its development: businesses and institutions can share their developments and make the software evolve in ways that are simply not possible with non-free software.

Moreover, free software fosters competition and diversity, where non-free software tends to favor monopolies, and industrial secrets–or software patents–that block innovation. But with the source code in hand, anything is possible.

Finally, free software allows flexible support, that can be done in-house, or by a chosen service provider. In contrast, usually, the normalization of non-free software support makes it difficult or impossible to adapt to specific needs of the user.

15 years later, free software has reached its goal of embracing the market, and becoming a mainstream technology; and, we’re still talking about the Debian Free Software Guidelines. As globalization continues, it makes more acute the failures and shortcomings of democracy, and the fallacy of “free” markets. People around the world want, and need more freedom, now: all of you, all of us, deserve it[fn:15].

Free software gives you freedom and it’s time to insist (again) on that specificity. The GNU project[fn:16] is turning 30 years old this year: make it so that 2013 be the year of software freedom.

Thank you open-source, you served well. Welcome back, free software!

—
Verbatim copying and distribution of this entire article are permitted worldwide, without royalty, in any medium, provided this notice is preserved.

This article is maintained in a public Git repository.

[fn:4] Knowledge for all, freedom to learn, towards collective wisdom for a sustainable world

[fn:6] In French, /libre/ has the same problem as /free/ in English: both words can mean /gratis/ or /free of charge/. However, /esprit libre/, /economie libre/, ou /citoyen libre/ are respectively translated to /free spirit/, /free economy/, and /free citizen/: none bear the meaning of price. The bad cultural habit of confusing freedom with comfort is not yet shared globally, but the need for freedom is.

[fn:8] Why “Open Source” is missing the point of Free Software

[fn:9] Richard M Stallman says: I define freedom as “having control over your own life”. (in correspondence, January 28th 2013)

[fn:15] Why Software Should Not Have Owners 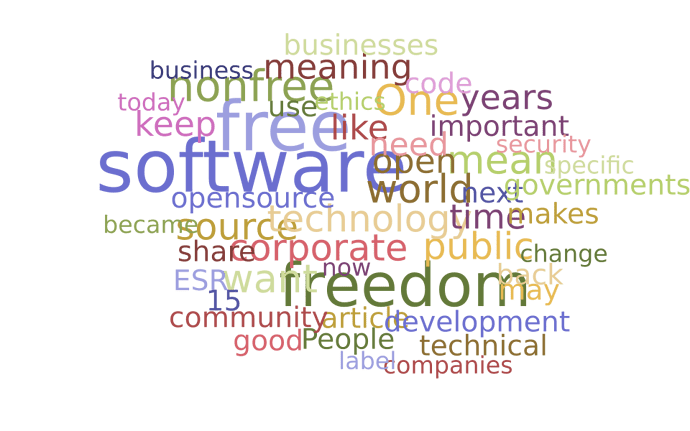