We were very happy to organize OFFDEM in Brussels last week-end, the reasons that originally motivated its organization became even more explicit as the week-end passed and people were coming from ULB saying they were overwhelmed by surveillance capitalist advertisement, and talks led by the same people.
Although we do bring forward the necessity to do a meeting in good conditions; private space was available along with food creativity and drinks, we propose to take our time to meet eachother. How ever, the aim of OFFDEM is not to be a chill-out place, but to offer a space where we organize out from the surveillance capitalism control, and for this we need more support from all of you, we already got great support from important groups, TOR people, Edri, activity pub (social hub community), etc…
We have welcomed a number of you, but still we need more commitments from developers to join and organize meet up out from the existing propositions.

It feels like many of us are aware that if we leave our societies in the hands of surveillance capitalism centralized in a few companies, we will not be able to uphold democratic processes anymore. But it seems like the ones who are working in the sector are not yet committed to organize elsewhere, then in places sponsored and by surveillance capitalist society. We will continue to provide work and space to do so.

We do not know if we will have the possibility to organize such an event every year, but we will try, and it will be easier with the help of all of you.

We are in the process of writing an open letter and welcome participation, this will be communicated here, we welcome suggestion and participation to its writing.

overwhelmed by surveillance capitalist advertisement, and talks led by the same people.

and disappointed and sad about very weak FOSDEM talks by other people.
One talk was “naming all the problems of the fediverse in 15 minutes without mentioning the solutions we actively work on”.
And just before OFFDEM worked on these solutions … 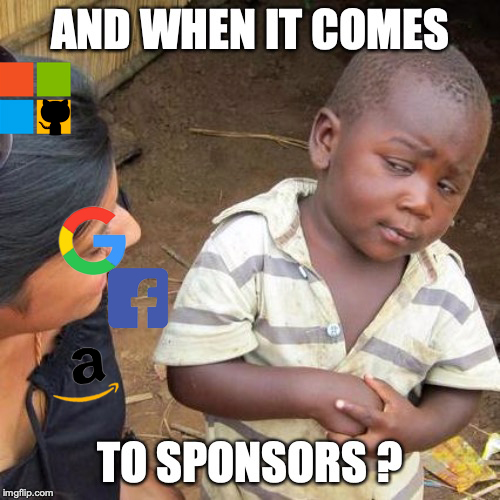 The evil surveillance capitalists sponsoring is not only raising their voices.
It seems to make free voices more silent.

And a personal remark:
The works and goals of e.g. Edri and ActivityPub are immediately connected.
I would wish an even stronger and closer partnership.

hey @SebastianLasse thanks for contributions, if you have the references of the talks that seem akward to you, please list them, it can be useful to keep track of this information. And yes edri is interesting structure, I think they take membership only from organisations.

Hello friends and thanks for organising OFFDEM. I missed it this year, but I plan to be there in the next edition. The discussion about sponsorship is quite complicated in terms of practice, not ethics, and I’m really happy to see that this is being talked about more and more these days.
We are having the same discussion for OSCAL, a similar event happening in 16-17 May in Tirana where you are invited to join the discussion. In Albania we have had two laws that have been directly addressing local independent online news outlets and also encryption and we are trying to raise awareness locally, but it has been quite hard to explain the importance of such issues. In a few words, we need to to talk about surveillance capitalism at major gatherings, but also at small local communities and we can do this only by getting connected more. This forum is a good start so let’s keep the discussion going

Hi @redonski welcome and thanks for your message. Indeed Oscal looks like a great community event, I need to check with my calendar, if I can I will submit something to present what we do with petites singularités, particularly regarding 3TS also documented here https://ps.zoethical.org/c/engagement/3rd-technoscape

If you could make it would be awesome! We (people of this group and like-minded people) need to meet even more. Looking forward.