The threat to free software

This text was originally published on January 5th, 012020 HE and was revised for this edition. On peut le lire en français.

" It is this sum total of these modern attempts to perpetuate colonialism while at the same time talking about ‘freedom’, which has come to be known as neo-colonialism." [1]
— NKWAME NKRUMAH NEO-COLONIALISM
The Last Stage of Imperialism, London, Thomas Nelson & Sons, Ltd., 1965.

We[2], as a group of free software activists, have decided in 2020 to organize OFFDEM, an intersectional gathering around collective practices and free technology productions. Our reasons have been explained in a friendly post on p.s.: forum: Why OFFDEM?

It now seems about time to voice our feelings towards the astonishing preemption of the developers communities by surveillance capitalist corporations. While there has been large social movements to claim “Fuck Off Google”, and protests against Amazon burst all over the world, large protests in India against Facebook, those companies and other GMAFIA brands are promoted by our “community” events, which also receive individual donations and are organized by people who are often volunteers.
We find unacceptable that our communities be associated with such companies: instead of supporting people around the world who oppose their domination, we cross their picket line. If free technology producers do not stand up to surveillance capitalist corporations, who will?

OFFDEM is open for freedom, desire, emancipation, meaning. It was a first, necessary step to affirm the existence of free software outside of the reach of surveillance capitalism. Someone had to do it. We took the risk, and all the people who attended with us[3].

Since 2020, OFFDEM has been proving its relevance, because the moments spent together are materialized in acts, the choice of decentralization opens up possibilities and explores new paths outside of surveillance systems.

We want to affirm the possibility of gathering in a different way, in conviviality, comfort, benevolence and hospitality; we want to remind that this form of convivial gathering reflects the values of our community much more than any intensive corporate event, which FOSDEM has become over the years, shaped by the mentality of surveillance capitalism and Silicon Valley. This is not like us, and we will not let them crash our party.

The factory of technical violence

The material origins of powerlessness

Change comes only through action, but the simplest action seems unattainable. As producers of technology, we remain caught up in the dominant operating models, despite our awareness of the reality of the situation: our actions continue to bring destruction beyond our borders.

The infrastructures that organize our communications and industrial production are in the hands of actors who seem beyond our reach. If contemporary activists have never had so many means to organize, the scales of destruction and violence of the military-industrial complex are exponential, leaving barely any interstices for our action.

We also know from experience that the recurrent re-appropriation of all our community models by an insatiable system shows the power of our associative capacities. This pattern of co-option by industry repeats itself over and over again. “Their resource radar detects what can be pumped out for free and comes to suck the energy, according to the famous principle: Embrace, Extend, Extinguish.”[4]

From systemic violence to technological cannibalism

We can observe, in our ultra-liberticidal, madly capitalist world, that everything our production system touches is immediately destroyed, just like the legendary King Midas who turned everything he touched into gold, until he could no longer eat or drink. These fatal consequences are borne by all ecosystems and by the most vulnerable people in our society.

It is a widely accepted fact that we have blood on our hands, that every day our comfort is provided by soldiers who monitor the mines, fly the drones that will erase lives through a screen, out of sight, out of mind, funded by “structural programs” to “defend” access to “our territories,” by politicians who delegate atrocities to “regimes” set up and maintained by “diplomatic”, “commercial”, and “democratic” coercive forces. The propaganda is unquenchable on the benefits of “civilization”—ours, but remains silent on its mass graves—theirs. Similar is that which resembles us and which industry can assemble; beyond this utilitarian distinction, we fall into the implausible – yet the norm. Yet this reality is most often impossible to address at the heart of our organizations, and we have just passed a point where the discourse of power “saves lives one by one” while, in the meantime, technological solutions to social problems are still being sought, in vain. For the propaganda strives, with disconcerting ease and success, to put all the weight of the responsibility of the system on individuals — not collectively, en masse, but in isolation, in a detached way, intimately accused – on the individual atomized by this system that deconstructs him.

The proposal to OFFDEM is to trust in the capacities and knowledge of our networks of resistance, the only ones capable of inhabiting the interstices, of forging links according to other modalities, lively, perennial; in the face of insurmountable pressure, to take a step aside and erase the burden by letting it fall under its own weight in order to consider the facets that usually remain invisible: those strings pulled and frayed, those empty words, those shareholders without action, those financiers without thickness, those one-way mirrors where the emptiness of accusing and demotivating speeches is reflected ; then watch, from the embankments where we are, the train of progress and growth pass by, hurtling towards a mountain whose tunnel at the end of the rails, however real, has just been painted by a mischievous Geococcyx californianus who will revel with the audience in the devastating compaction of the ultimate crisis – if the audience ever survives it. On the embankments grow grasses, fragile and thirsty, carrying the whistle of the winds even after the catastrophe.

OFFDEM and THX are the points of connection where we will continue to think together and build the tools, the methods, the collective, that will allow us to take that side step we talk about all the time; to branch off, to pull the brake, to continue elsewhere, differently, here and now…

What are the conditions for escaping from systemic pressure? We imagine them in the collective. We wish them out of the compromise. We know that they are subject to the inertia and tentacles of reality. Far from summing them up as a life recluse behind a screen, between four walls, behind an explosion engine or next to another jet engine, or surrounded by men in arms, we conceive them, intimately, also as propitious to another relation to the world, subjected to a desire to live together, to the will of a good life.

What is alive is dephasing to be no longer oneself–and this is how it remains. The side step, it is this dephasing, this force of the living to accept nothing of the ineluctable, to make it null and void every time that it comes to announce its triumph. The life is what resists entropy, to the ultimate homogenization, the uniformity of the world towards the sand of time, the announced end of the universe; but in the meantime, we are there, here and now, everywhere to affirm compossible living worlds. 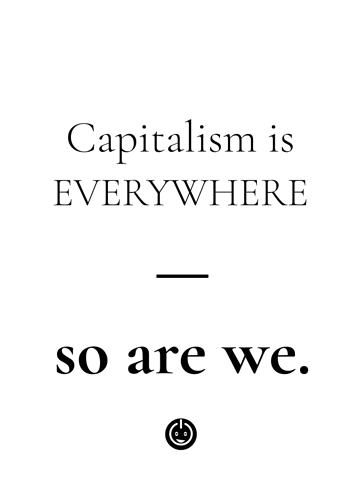